*These are stock photos. For actual photos of the instrument, please contact us.

In 1967 George Harrison used Day-Glo paints and nail polish to transform his 1961 Sonic Blue Stratocaster into a psychedelic work of art known as “Rocky.” Featuring Vintera ’60s Stratocaster pickups, a slab rosewood fingerboard and a vibrant hand-painted finish, the George Harrison “Rocky” Strat is a fitting tribute to that one-of-a-kind guitar.

George Harrison’s impact and influence on popular music is unparalleled. Known for pushing musical boundaries and sonic experimentation, George’s inventive hooks and groundbreaking tones helped propel the Beatles into legendary status. George played a variety of iconic guitars throughout his career, but the most visually distinctive was his 1961 Sonic Blue Stratocaster, hand-painted in psychedelic Day-Glo colors and affectionately named “Rocky.” George acquired the guitar in 1965 and first used it on the Beatles’ Rubber Soul album and continued to play it extensively on subsequent recordings including Revolver, Sgt Pepper’s Lonely Hearts Club Band, Magical Mystery Tour and the White Album.

A RARE FIND
In the late 1950s and early ’60s, Stratocaster guitars were almost impossible to find in England, so the fact that George Harrison actually added one to his arsenal when the Beatles were single-handedly changing the face of music was special.

As the story goes, Harrison sent roadie Mal Evans to purchase a pair of Strats in 1965, and Evans came back with two Sonic Blue models. It was George’s first Stratocaster — and it quickly became a useful tool.

In the ensuing years, the Strat saw more prominent use on the game-changing 1965 album Rubber Soul — check out the ringing solo on “Nowhere Man” — and subsequent smashes Revolver, The White Album, Get Back, and Abbey Road. 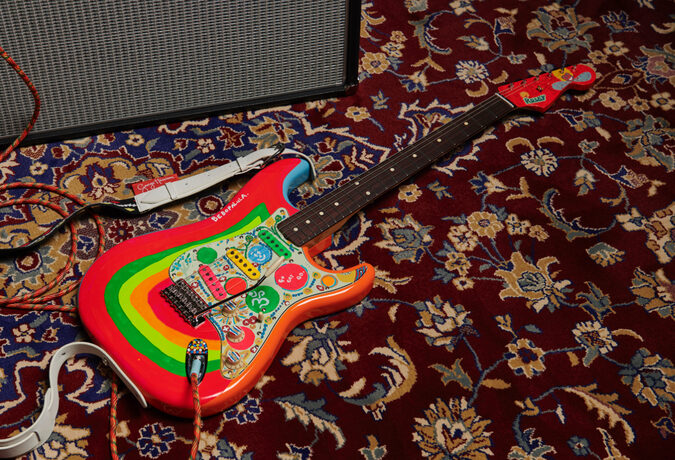 MADE WHOLLY UNIQUE
Sometime between the 1967 Sgt. Pepper’s Lonely Hearts Club Band sessions and the June 25 live global telecast of “All You Need is Love,” Harrison’s beloved Stratocaster morphed into what the world now knows as “Rocky.”

In a fit of inspiration, he grabbed a brush and some Day-Glo paint to give the instrument a multicolored psychedelic makeover. Instead of the iconic Sonic Blue finish, its top and headstock were now adorned with bright red, green, yellow and orange accents, making it truly stand out on stage.

Harrison even painted “Bebopalula” on the upper body, “Go Cat Go” on the pickguard and Rocky on the headstock in December of 1969.

Towards the end of the decade, he began using Rocky to play slide guitar, creating a signature sound that spanned his storied solo career. The slide technique that he developed on Rocky was most notably used across his landmark 1987 album, Cloud Nine. 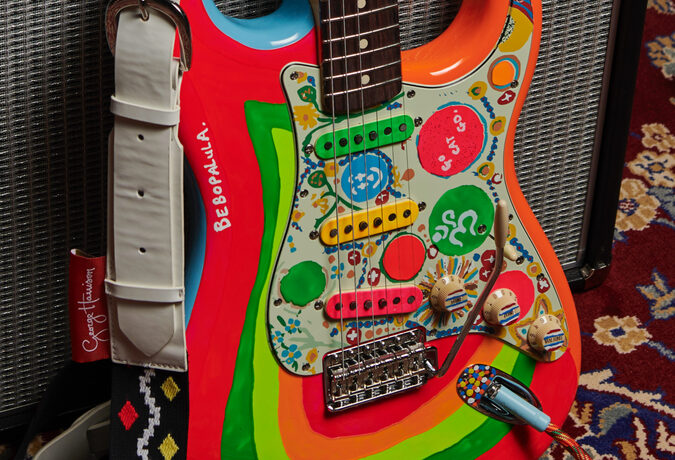 Capturing every artistic detail, this model is loaded with a trio of vintage-style ’60s Stratocaster pickups that sing with the dynamic, crystalline tone that recalls Fender’s golden age and a Mid-’60s “C”-shaped maple neck for a classic feel.

Meticulously crafted, the George Harrison Rocky Stratocaster is a fitting tribute to the magic it created in the hands of one of rock’s greatest artists. 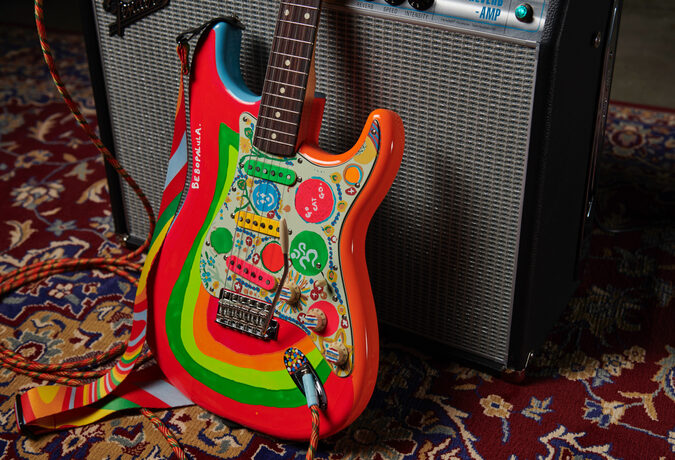 *Not all bags and cases fit all guitars. If you aren't sure, please check with us at the store. Admin@easymusiccenter.com or call 808-591-0999.

At Easy Music Center, we care for our instruments from the moment they arrive to when they ship to your door. All instruments are stored in a climate controlled environment and put through a 12-point inspection checklist before being shipped.

First, we check the finish of the instrument, carefully inspecting any blemishes on the surface. Next, we check the playability and setup by inspecting and adjusting the truss rod (if available), bridge, nut, and frets to manufacturer factory specifications. Any request made outside of manufacturer factory specifications can incur additional charges for parts and labor. If the instrument has electronics, we test all of the electronic components to make sure they are functioning properly.

After a thorough inspection, we then move on to maintenance. We start by lubricating any moving parts on the instrument, such as tuning machines. We then move on to cleaning and oiling the fretboard along with the frets.

Once maintenance is done, we stretch and tune the strings and play test the instrument. After this, we do a final inspection and clean/detail the instrument before packing it up for shipment.

We’re excited to be a part of your instrument buying experience.